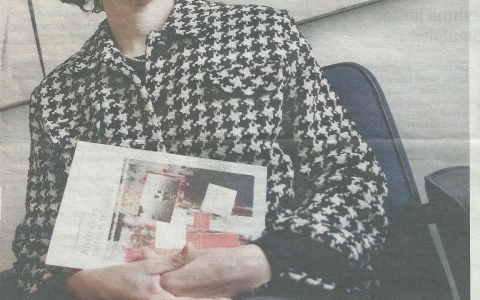 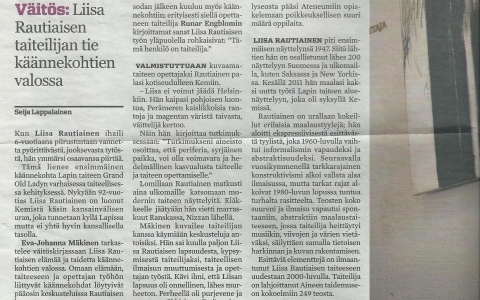 Liisa Rautiainen worked as an art teacher from 1953 to 1979 practicing an artist’s profession simultaneously. She had her first exhibition in 1947 and, ever since, she had numerous exhibitions in Finland and abroad, for example in Germany and New York. In 1992, Rautiainen conferred the degree of doctor honoriscausa at the University of Lapland. In his strictures against the 60th-anniversary exhibition of the Union of Finnish Art Associations Finland, Rautio (1998) wrote: “But isn’t that surprising to find such a skillful painter from Kemi!

My main approach in this study was the theory of artistic development that is grounded on Kindler and Darras’s theory (1997). A semiotic, socio-cultural, and pluri-media approach influenced in the background. As the philosophical background, this approach grounds on an idea that artistic development is directed through the conflict of two opposite power: the general and individual one. I analyzed Rautiainen’s artistic development in the light of Erben’s (1998) specific events and Denzin’s (1989) turning points of life or epiphanies.

In this research, the biographical method was employed to analyze the artist’s life and the turning points of her artistic development. Thick descriptions that were acquired through interviews revealed these turning points in the detailed descriptions in the interviewee’s narration. Visual memories and experiences with voices and people were brought out. The research also represents a micro-historical approach making the researcher analyze little details in the course of life—in this research, to the artist’s brush strokes. The micro-historical approach also meant that the spotlight was in the artist’s experiences.

The core data consisted of 12 open interviews with LiisaRautiainen. In addition, Rautiainen’s 75 paintings and drawings, copies of 39 sketchbook pages, and 469 pieces of various documents, journal articles, and photographs of her life-span that related to her artistic action and work as an art teacher. Besides I interviewed photographer DetlefTrefz, the friend of Rautiainen.

The data of my research proved that periphery, a remote place, can be strength and a fruitful seedbed for art and art teaching. Liisa Rautiainen’s almost 30-year-long work was filled with enthusiasm, positivity, boldness, and creativity. She introduced the world of fine arts to her students for example by taking them to art museums frequently. She paid especial attention to art tasks that were versatile and varied and that combined cognitive matters and those related to emotional life. She encouraged students to be creative and considered it important to maintain atmosphere respectful to students. Several Rautiainen’s students choose art as their profession.

LiisaRautiainen’s interest in international trends in painting played a role in her development into an abstract artist. In addition to taking studies in art history, she found it necessary to travel abroad to look at modern art in museums and exhibitions. In summer, she visited especially West-European museums and wanted to see artists’ retrospective exhibitions where the turning of expressions into abstract was perceivable. Having language skills, Liisa Rautiainen found it easy to travel abroad and after coming back to Kemi she passed on her students all she had seen and experienced. Discussions with other artists always belonged to Rautiainen’s life and, in Germany and elsewhere, she has numerous friend artists who she is still in touch with. She has also had many joint exhibitions with her friend artists. Altogether, Rautiainen has had or participated in approximately 200 exhibitions.

Changes symbolize Rautiainen’s abstract art: in the 1950s, expressive expression changed cubist; in the 1960s, informalism liberated her expression; in the 1970s, constructivist precision, geometry, and color transitions were dominant; in the 1980s, equable surfaces turned pulsating colors, lines, and surfaces; in the 1990s, various tones of black and shades became dominant; and in the 2000s, her expression became more simplified. Rautiainen’s principle has always been to work with a similar theme and expression as long as every possible thought and idea was tested.

Liisa Rautiainen’s career and development as an artist and art teacher represents an ideal career and—due to her all talent and positivity toward art and art education—she will leave a permanent mark.